Home / Top Stories / Helpful Tips & Info / Can You Ride a Motorcycle While Pregnant?

Can You Ride a Motorcycle While Pregnant?

Can you ride a motorcycle while pregnant and what are the risks involved? In this article and video we’ll talk about how motorcycle riding during pregnancy can effect mothers & the development of their unborn child, even if they never get into an accident.

Note: This article is mostly a re-visit and expansion of my riding a motorcycle while pregnant story from 2018. If you’ve already read that one, feel free to head back to the home page where there’s lots of other interesting motorcycle goodness to read :)

Pregnancy is a bit of a far stretch from my usual content. Typically I try to help you guys save a ton of money by showing you how to do your own motorcycle maintenance, or keep you up to date on the latest motorcycle industry news. But while the motorcycle world is getting more and more women riders, it’s still very male-dominated, especially on YouTube, and there just isn’t anyone producing content aimed at women riders, especially those who may be pregnant or may be thinking about getting pregnant in the near future, so I wanted to give it a shot. 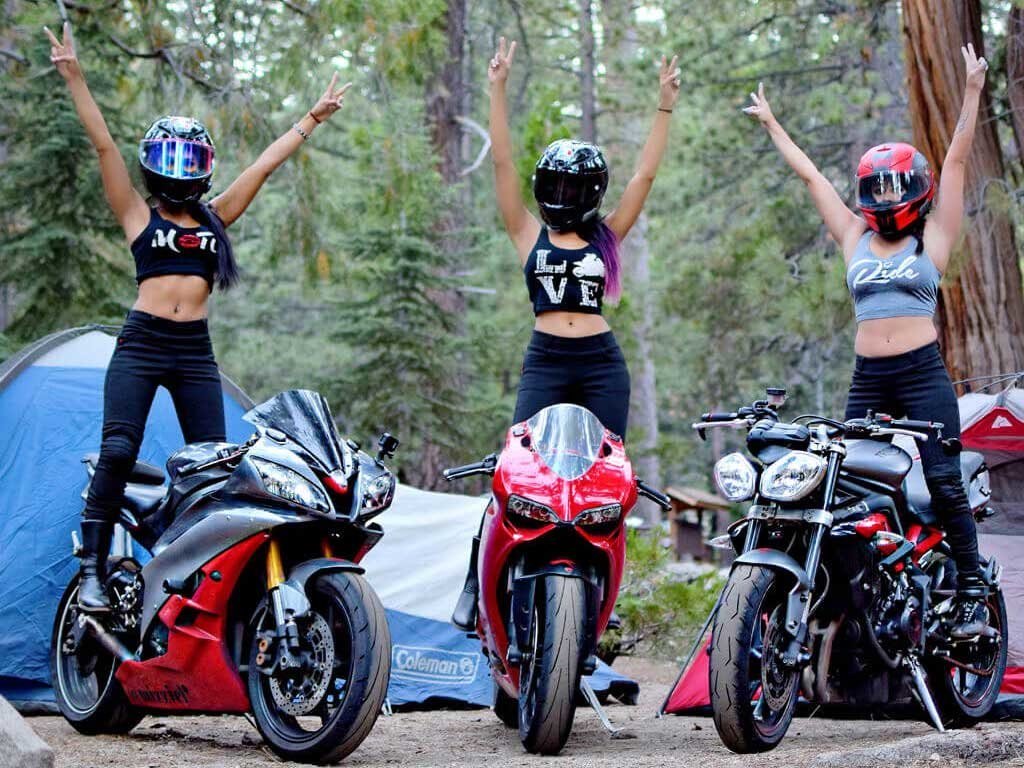 In this article and video I’ll be paraphrasing a conversation that a friend of mine had with her doctor. Jane (not her real name) is an avid motorcyclist who found out she was pregnant, so she went to her doctor and asked how she could (or couldn’t) keep riding her motorcycle. I really enjoyed this because Jane’s conversation with her doctor wasn’t just about how pregnancy effects a woman’s body, but it was more about how pregnancy would effect Jane’s motorcycle riding, and also how Jane’s motorcycle riding would effect her pregnancy.

Note: I’m not a doctor, and neither is Jane. We’re just two strangers on the internet trying to help you. You should always follow your own doctor’s advice. With that in mind, please enjoy the video.

Motorcycling means something different to all of us. To some, motorcycling is a lifestyle, something we do every day on our way to and from work. To others, motorcycling is a fun activity we do on weekends. But weekend rides could be anything from up and down back country roads, to hitting up track days and setting new personal bests.

The reality is, no matter what kind of motorcycle riding you do, there’s one universal that applies to all of us: whether we push motorcycling to extremes or not, every motorcycle ride has all of the risks and dangers of an extreme sport. Obviously that means that there is always a risk of injury or worse to both mother and child, duh. But there are other ways that motorcycling can effect a pregnancy that the average person may not be aware of.

Whether you’re pregnant or not, motorcycling has certain effects on our bodies:

These aren’t the only differences pregnant women would face while motorcycle riding. In general, whether pregnant or not, while motorcycle riding we rely on our postural muscles and bone structure for balance and to control and steer our motorcycles. However, for pregnant women, this is a bit more tricky. A pregnant woman’s anatomy is changing, so her center of gravity, and even her spine, will change along with it. How she handled her bike two months earlier may be different from two months later. If anything happens it could effect both mother and child

We won’t get into the dangers and risks too much. As a motorcyclist reading this, you probably already understand the risks involved in riding motorcycles. You probably already understand that motorcycling is a full body experience. If your body isn’t feeling quite right, if you didn’t sleep well, if there’s something off, if you’re nauseous, or any number of other things could effect your performance and reaction time on a motorcycle.

What I want to focus on instead that motorcycle riding can still have effects on your pregnancy, even if you never get into an accident.

When riding, the pregnant uterus is exposed to shocks and vibrations that can affect the implantation of the embryo in the early stages of pregnancy. As a woman progresses further in pregnancy, the effects can be more severe.

So even in the first twelve weeks of pregnancy, where doctors typically agree women are still able to safely do sports, is it okay to ride a motorcycle while pregnant? Well, even though you may never be in a motorcycle accident, motorcycle riding, especially more physical rides like off-road dirt biking or racing, could potentially still negatively impact your pregnancy.

Please remember, I’m not trying to tell you that you should or shouldn’t be riding, my goal is to simply put some information in front of you guys (well, in front of you ladies specifically), so that you can decide what level of risk you’re comfortable with, as a person, as a family, or however it is you’ll be making this decision.

“I felt like I wanted to be a good mom, but I also wanted to be me, and I didn’t want my pregnancy to feel like some kind of debilitating disease.” The risks of motorcycling during pregnancy aren’t just physical, there are mental risks too

They say motorcycle riding is 20% physical, and 80% mental. I guess we shouldn’t be surprised to find out that motorcycling, being such a mental-labor of an activity, can also effect your child’s mental development.

If you’re taking back country roads for a 20 minute ride on a sunny Sunday morning, you aren’t necessarily going to come across a lot of traffic, risks, or stressful circumstances. If on the other hand, your 20 minute motorcycle ride is a densely populated city where you’ll come across 500 different cars all pulling in front of you, that can set you up for a lot of stress.

Unfortunately, studies have shown that stress can cause perinatal complications such as puerperium mental disorders such as concentration disorders and issues with brain development.

Feeling stuck between a rock and a hard place

Juggling the two parts of her life weren’t easy. We talked on the phone one day and Jane said, “I felt like I wanted to be a good mom, but I also want to be me, and I don’t want my pregnancy to feel like some kind of debilitating disease.” Obviously, there are a ton of ways that pregnancy can effect you while riding. Jane had the self-awareness to know that she had a cute little baby bump (that she enjoyed when she was feeling well), but she also knew that the bigger this bump got, the more it was going to effect her own center of gravity, which would effect her balance, which would effect how she felt handling her motorcycle.

If you’re a motorcyclist reading this, you already know that motorcycling really is a full-body activity: you need your head to be clear and alert, your body to be rested, hydrated, and sober so that you can be ready to react precisely, and you need your emotions to be in-check so that when someone inevitably does something stupid around you, you’ll be able to shrug it off and keep going. That’s a lot to manage on a good day, so if you aren’t already feeling 100% yourself, that can become even harder.

In Jane’s case, she weighed the pros and cons, took it day by day, and she knew when it was time to hang up her helmet for a while.

Rather than paraphrase, I think I’ll give you Jane’s own words:

“I know from my own experience that gymnastics during pregnancy provided me with physical fitness and at the same time had a positive effect on my mood. If gymnastics isn’t for you, try pilates, aquatics, or yoga classes, and programs specifically for pregnant women.”

Jane did that for a while, and her and her husband have a healthy son, and they’re doing great. Here’s a bit more from Jane:

“To sum up, there will come a time when women who ride should park their motorcycles, however, there are plenty of other activities, including fitness and motorhome camping that worked for me. Pregnancy is not a crippling disease but the safety of both mother and child are most important.”

Remember: I’m not a doctor, Jane is not a doctor, so please have this conversation with your own doctor. We’re just two strangers on the internet trying to help.

COMMENTS: Would you (or your partner) ride a motorcycle while pregnant? Let me know your thoughts!

Previous: Norton Motorcycles Bought by TVS Motors of India
Next: What to do When You Can’t Ride Your Motorcycle