YouMotorcycle has always welcomed women who take motorcycling seriously with open arms. In Fall 2011 we did two Q&A sessions with Madeline “MISSRIDER” Velazquez about her solo motorcycle ride across North America. In Summer 2012, we invited six female motorcyclists from Twitter to come out and share their Opinions on Pink Motorcycle Gear and Kelly Rogers from Hellcat Customs came by to tell us about Hellcat’s landspeed record run.

Those early posts weren’t nearly enough of a nod or a motorcycle wave to our sisters on two wheels as I wanted to give. They were the first steps to what would eventually lead to a monthly post on Women Riders, our Featured Woman of the Month posts.

Featured Women Motorcyclists of the Month, Class of 2013

Our first ever Woman of the Month was Danielle Gnidec. Dani won us over with her talent, strength, and charisma. Little did we know she was also one of the most caring individuals we ever had ever met. Dani was of two Toronto contortionists at the world’s first motorcycle contortionist photo shoot. Her own motorcycle wasn’t featured in the photo shoot as she’s been tearing it apart for a complete rebuild. Our next Woman of the Month used motorcycles and her body in a completely different way. Born on the back seat of a motorcycle, Freyja Van Siren would later move up to the front seat. Freyja’s an alternative model from Florida, riding around on her 1970s Kawasaki. Don’t let the modeling fool you. Freyja loves to get her hands dirty on her motorcycle herself and though she claims to have ridden every type of Harley ever made she prefers retro metric cafe racers.

The August Woman of the Month was super-person braniac Sabina Heilman. As the Director of Finance and Communications for KYMCO Canada, Sabina is one of few female Directors at an OEM power sports company in North America. She gave us an inside look at her position and how she approaches her work as a woman in the motorcycle business. 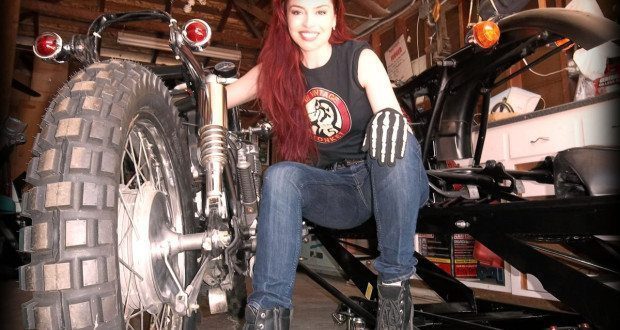 Your mother called. She says she found you the perfect woman on YouMotorcycle, her name is Shasta Smith and she was our Woman of the Month for September 2013. Shasta is a modern looking woman who surrounds herself with motorcycles from decades gone by, in her own shop, the Vintage Monkey. She then takes these old machines and sends them back out with their owners as good as new, and often better than new. It’s a successful business and Shasta’s unique look combined with her mechanic and business savvy made her an easy choice to feature. Nicole Winters found herself at the greatest racing event on the planet, and then she decided to make the most of it. When a business trip went wrong, Nicole found herself asking a local what there was to do. She was on the Isle of Man, home of the world renowned Isle of Man Tourist Trophy. Nicole would go on to write a book about a young man’s mission to race in the Isle of Man competition. The first draft of her fiction novel was written in only three days. Nicole transformed from motorcycle zero to motorcycle hero virtually overnight. Joanne Donn leads a difficult life. In the Fall of 2013 she was stuck travelling across Europe as she went to EICMA motorcycle show in Milan for business, and later she found herself riding around Ireland for a day or so on another trip. Shortly after her return home she began packing for her move Philadelphia where she’ll be working at the high end Revzilla boutique in South-Philadelphia. Joanne blogs at GearChic.com and co-hosts the Moterrific podcast. She eats, sleeps, and breathes motorcycles, and we love her for passion and knowledge of the world’s greatest outdoor sport.

To current female motorcyclists all the way back to women like the Van Buren sisters who road across mud highways in the 1920s, thank you all for your contributions to motorcycling. To our Featured Woman of the Month, congratulations and thank you for your supporting YouMotorcycle and allowing us to share your story. You’re all exceptional people that I would be honored to ride with.

Know of someone who would be a good candidate for next month’s Woman of the Month? Nominate her in the comments below, or let us know what you think of our Class of 2013!

Tagged with: Woman of the Month Women Women Riders