How would you feel about leaving your town to your the world, making a crowd-funded documentary on kustom kulture? Three years after the hot rods, motorcycles, pinup models, and rockabilly music of Flake & Flames hit the web, we say down to talk shop with Jesper. We’ve got his reflection on the documentary, his adventure, the impact on his life, what he’s up to now, and his thoughts on a Flake & Flames: Part 2. Shared with permission from bikerMetric:

bikerMetric: When you first set out in 2011, to make a documentary, what was going on in your life and in your mind?

Jesper Bram: In 2009, after a long career in IT and advertising, I started doing pinstriping and illustration commission jobs full time. I had just finished a well paid project, and had some time and money I could use to create something. A year or so before I watched the documentary Devils & Angels, featuring a few Kustom Kulture artists and their work. I wanted to watch more and in feature film quality, so I had a dream of doing something that would focus more on the builders and artists and where you could really see the artists’ work. 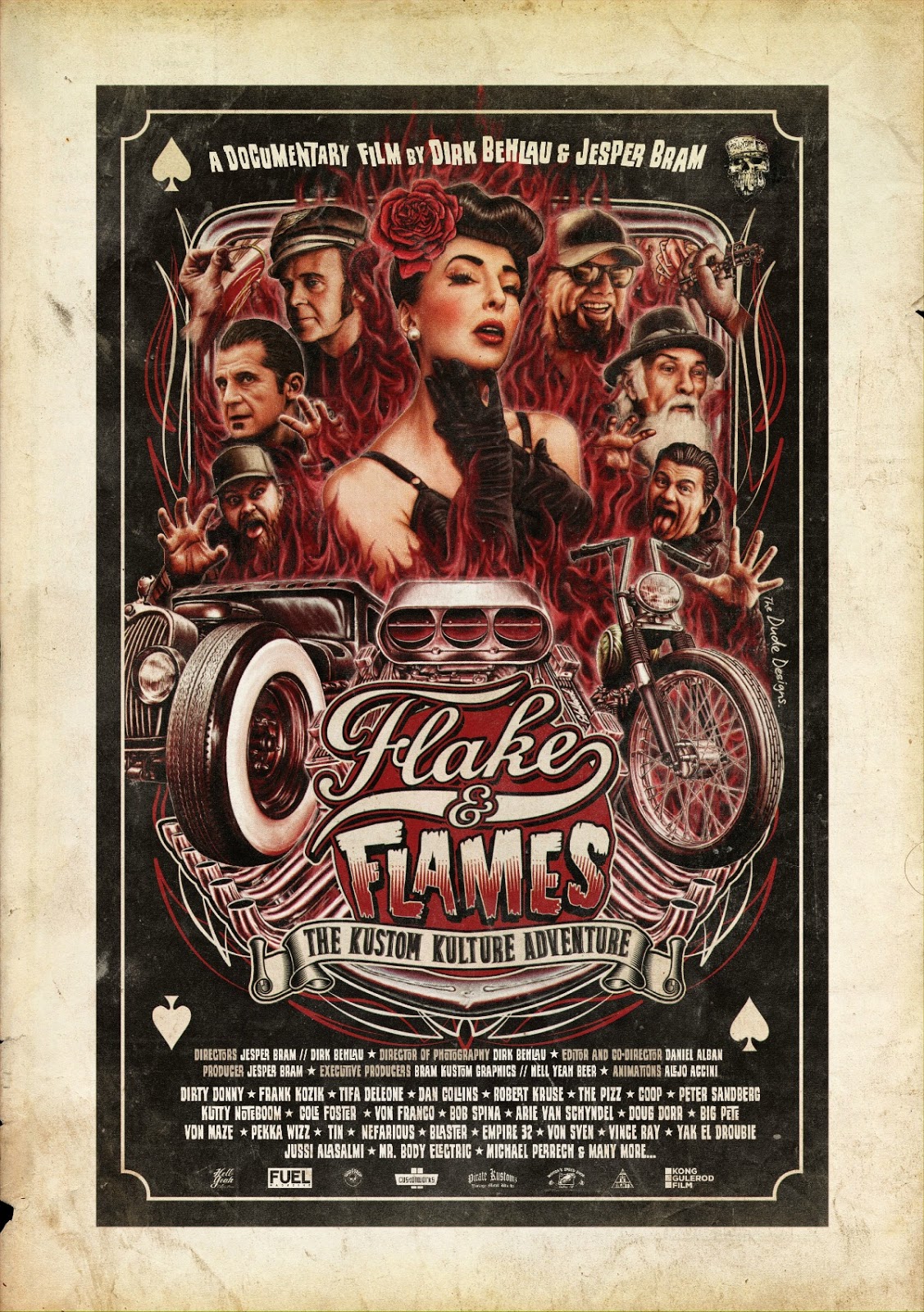 bikerMetric: What kind of movie were you heading out to make?

Jesper Bram: In 2010 I met my friend and German photographer, Dirk “Pixeleye” Behlau. It turned out that we were planning to go to many of the same car and art shows the following year, 2011. He also had thoughts about wanting to make some kind of film. So we decided to film at all the shows we were going to and see what would come out of it.

bikerMetric: What kind of movie did you end up with?

Jesper Bram: Pretty soon after we decided to do the project together it became less about just filming at the shows and more about doing an actual documentary film on DVD. We had met our Californian friend the Lowbrow artist and bass player in Dynotones, Rob Kruse, at a rockabilly show in Germany in 2010. He knew Franco, Pizz and Coop, and hooked us up with those guys. I knew Arie Van Schyndel, Kutty Noteboom, and Dan Collins from a couple of years earlier, and had met Cole Foster a couple of times before. Dirk knew Dirty Donny, who got us in contact with Kozik. Our good friend Yak from UK knew Vince Ray from UK, and so on and so forth. All of the sudden we had a really impressive list of people who all said yes to being involved in the project. 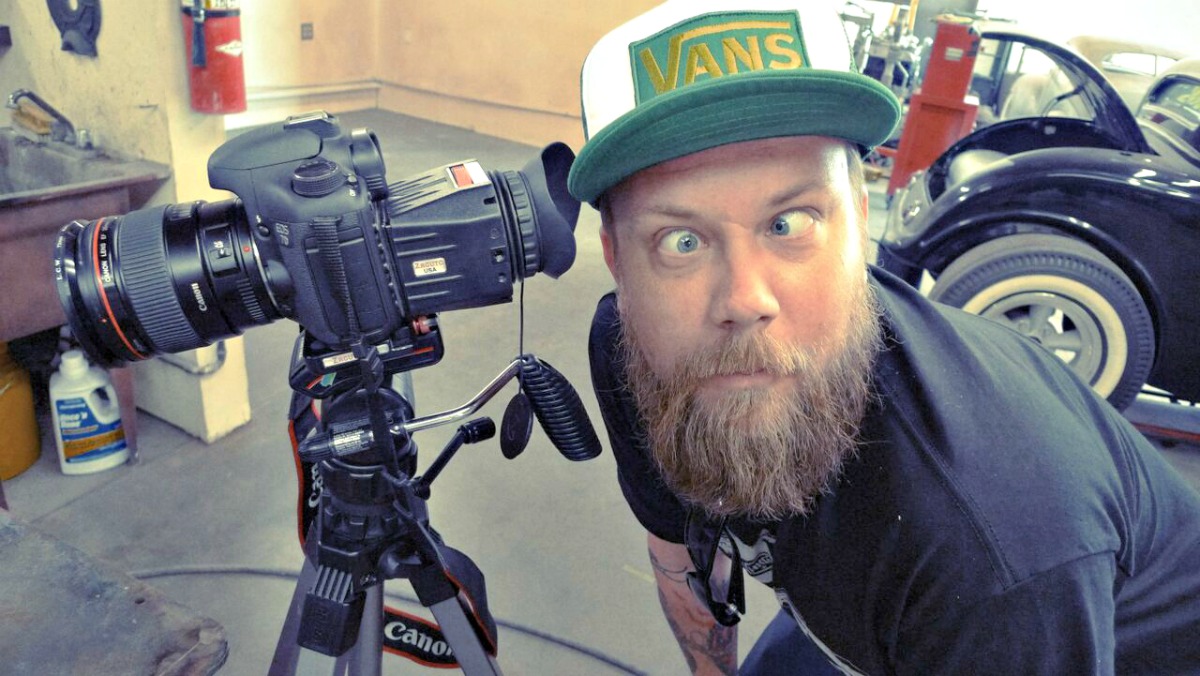 That’s when we found out that we needed professional help to pull this off. At the same time I had heard about the crowdfunding concept which was pretty new at that time, and I wanted to try that out. It worked very well for us. Other than that we didn’t have a plan, we just followed the flow. Which totally kicked our ass in post production. But Editor Daniel Alban and hundreds of man hours still made it happen.

bikerMetric: What left you the most in awe?

Jesper Bram: Without a doubt hanging out with the people we filmed. I was super charged with creative energy after meeting all those awesome people.

bikerMetric: What kind of reach and exposure has the documentary had?

Jesper Bram: If you consider that we are just two maniacs who had absolutely no clue about the film business, then I think you can regard it as a gigantic success. Flake & Flames has been screened at festivals basically all over the planet from United States, Europe to Asia. I was hoping that we would get to recoup some of the many many hours we spent working on the project without pay once the film was launched. That turned out not to be the case. But I have later learned that if you make a documentary and you haven’t actually lost any money, then it is considered a pretty big win. Especially when you raise all the funds your self without support from various film funds, which the established film industry relies heavily on. So we can be proud of that. 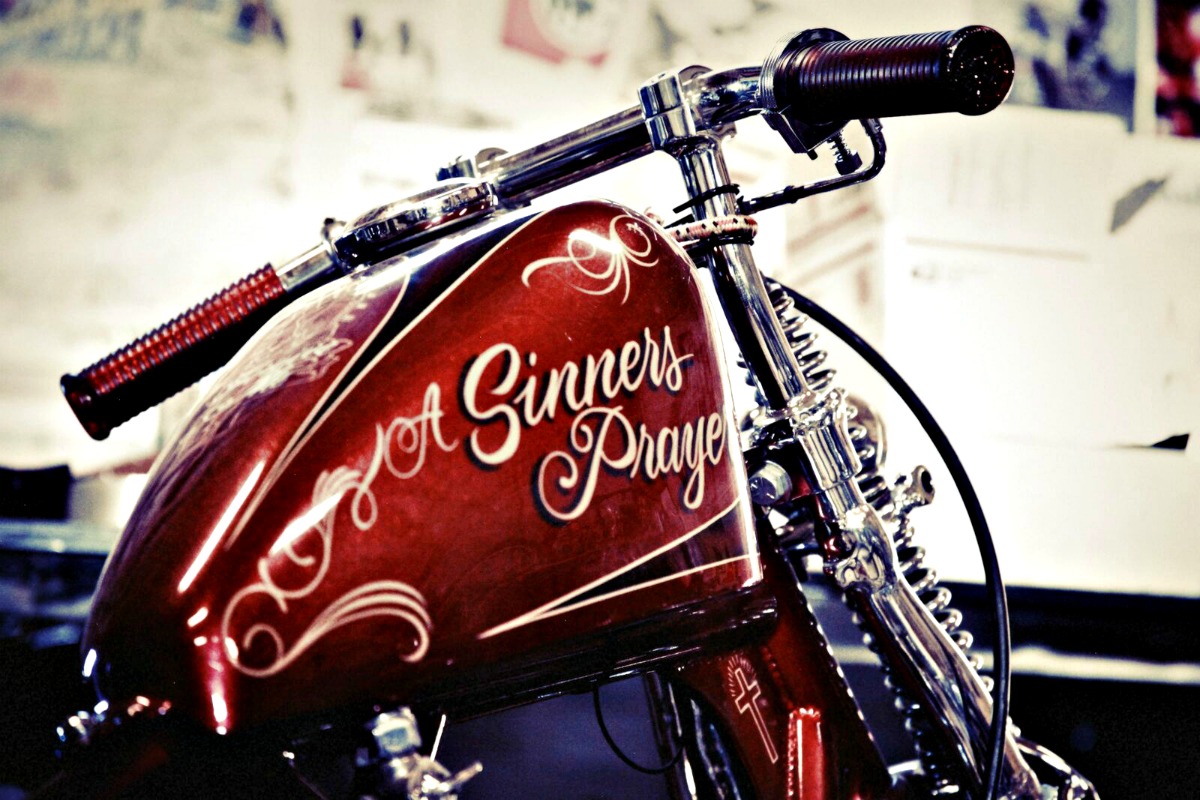 bikerMetric: Did you think it would get so big?

Jesper Bram: We got the feeling that we were on to something when we did the first crowdfunding campaign. But initially we had no idea or plan. I know how it is working long hours, nights and weekends to make things happen after being involved in several startup projects since the mid-nineties. Still I have never had to work as hard on anything as on Flake & Flames. Had it not been for very supportive family and friends I wouldn’t have made it. But when people come up to me and tell me that they started their own business painting, doing leather work, or building motorcycle etc. because they watched Flake & Flames, it makes all the hard work worth it. It doesn’t get any bigger than that. 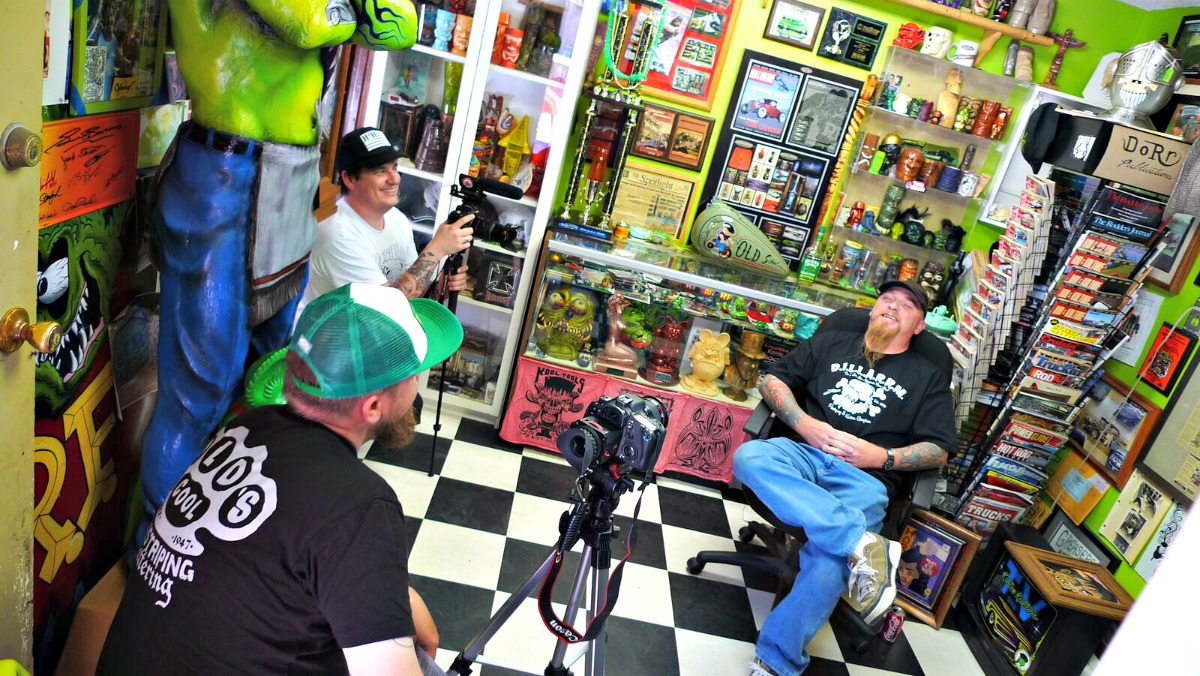 bikerMetric: That Bob Spina Jenna Jameson scene was a little weird. Ever look back on anything and wish you had done it different?

Jesper Bram: Yes, that scene is a bit weird. I actually wanted to take it out, but the good editor insisted that it added some flavour to the interview with Bob Spina, who is a super nice and funny guy. Many people I have talked to have different parts of the film that they love, and some they think are totally odd. I think the fact that it’s never the same thing people mention is an indication that we did the right thing. Like when Bob Spina says “A customer doesn’t like orange…well I start with orange” Some people think that’s arrogant, some people totally love it. I’m very happy that we created something people can talk about. 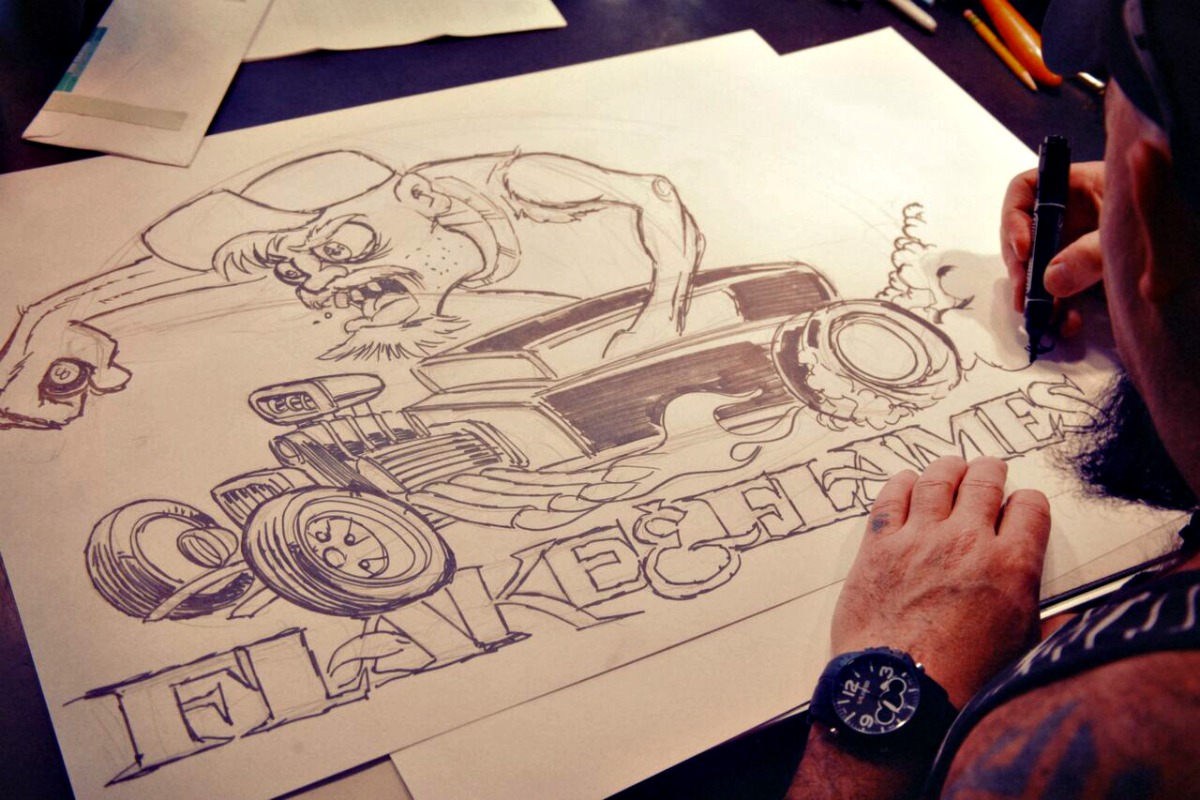 bikerMetric: I loved when Spina said that. It fits my view on life. Maybe that means people think I’m arrogant, but the truth is I just don’t care. Enough about me, where are you at now? What’s going on in your life?

Jesper Bram: Most importantly, in 2014 my wonderful son Iver Bram was born. So my main focus beyond anything else is being a great dad.

After Flake & Flames was released I kind of decided that I would never again get involved with a project which didn’t involve me drawing something. Singlehandedly setting up a world wide distribution network from scratch and dealing with all the administrative parts of a film project that a producer have to do, is an insane pain in the ass in my opinion. 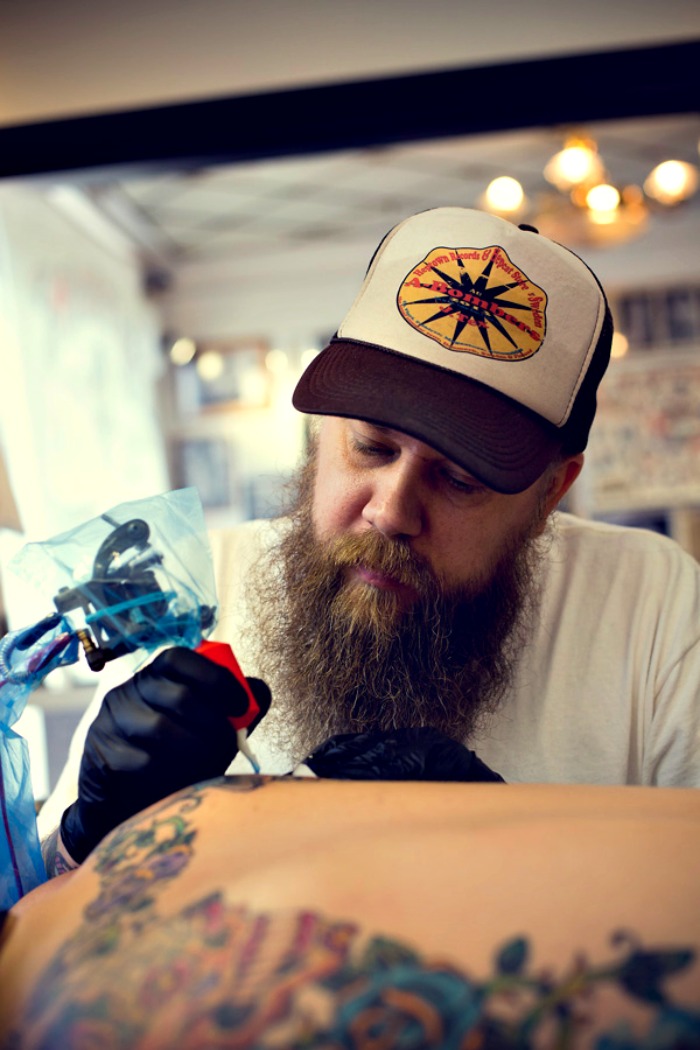 Drawing and painting is my main passion and always have been. That have now lead me to start a career in tattooing. Which I have done on a daily basis since February 2013 at Belair Tattoo in Copenhagen. I learned tattooing from Frank Rosenkilde who have tattooed since the seventies. I did my first tattoo design sketches as a teenager, and have designed many tattoos for people over the years. Now I wish I started tattooing 10 years ago. But that doesn’t matter. I’m loving exploring tattoo history and learning the specific aesthetics of traditional tattooing. I go to the studio everyday happy, with no desire to become the greatest tattooer on the planet. Too late for that. I just focus on doing what I like doing, and people seem to like it. So that works.

bikerMetric: Where’s the future taking you?

Jesper Bram: Creating more. Besides tattooing, I’m still doing illustration jobs on commission for t-shirts and so forth. Basically been drawing stuff for people all my life. I’m at a point in my life now where I live from drawing what I’m passionate about. My ambition is to continue to develop in that direction and take it as far as I can. I always have a billion ideas of things that would be cool to make 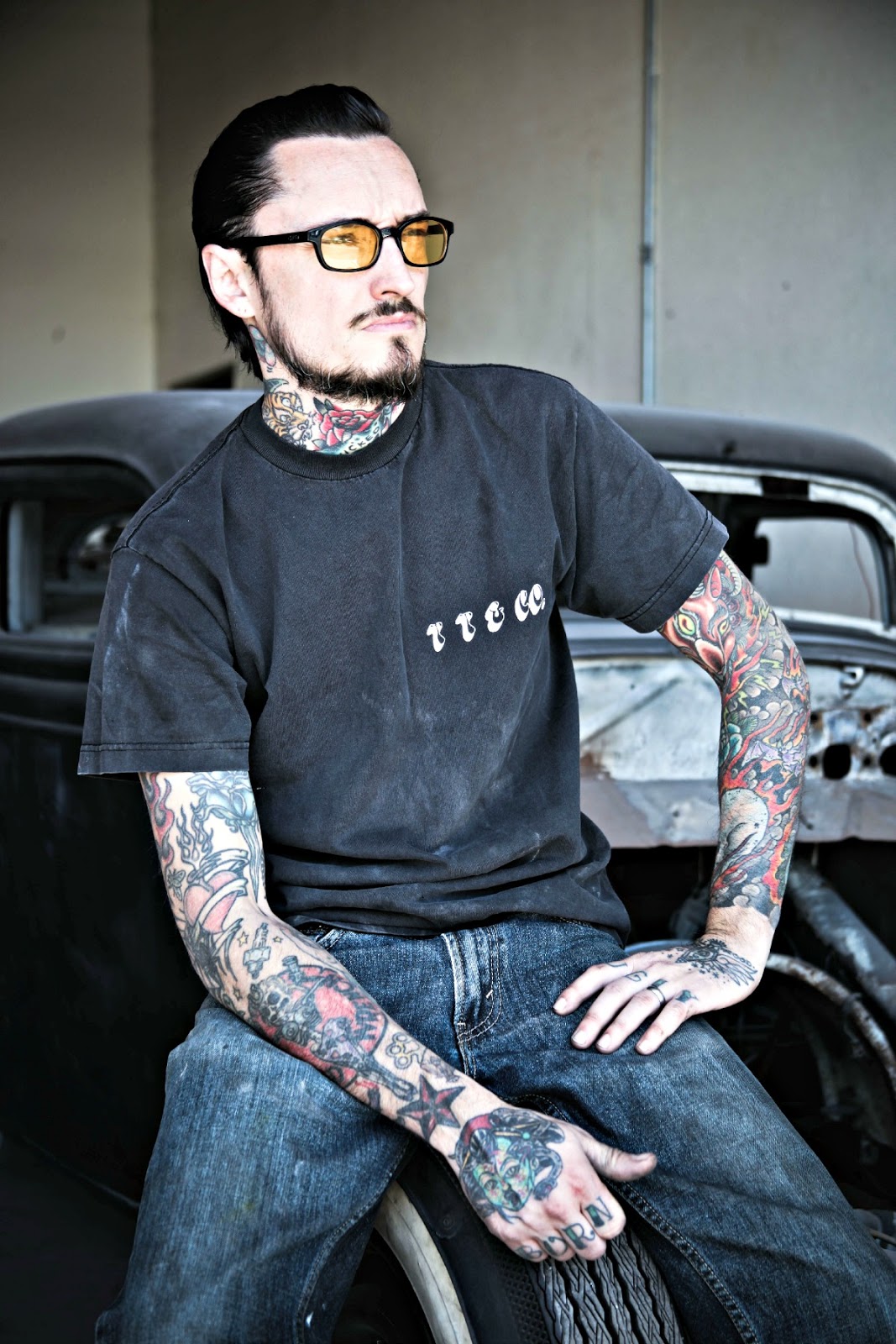 bikerMetric: Last but not least… Are we going to see a part two?

Jesper Bram: Making a straight up part two of Flake & Flames wouldn’t make any sense in my opinion. There’s lots of fantastic people creating awesome things out there. That we could interview. But the Kustom Kulture story have been told. It’s time for another format now. Something that goes deeper. I want to watch something that I can learn from. Something that can inspire me even more. It only took me a couple of months to brake the promise I made to my self about staying dedicated to drawing. We have been working on a new release from the world of Flake & Flames for a little less than 12 months now…It’s going to be different than you think. But it will be epic awesome…we call it Flake & Flames – Overdrive. Stay tuned at www.ffoverdrive.com

Get more Bram in your diet, check these out:
Pinstriping: pinstriping.dk
T-Shirts jesperbram.com
Tattoos bram.tattoo

Did you watch Flake & Flames? What did you think of it? Let us know in the comments or on Facebook or Twitter.

Shared with permission from bikerMetric.

Tagged with: Flake and Flames Videos

Previous: The Best Websites for Motorcyclists
Next: 5 Reasons Your Motorcycle Won’t Start & Goes to the Shop