When we last checked in with David Gulliver he was sharing his lust and love for the middleweight cruiser segment. David ended up buying a Hyosung GV650, a relatively unknown and misunderstood motorcycle. Armed with 10,000 miles of experience, he’s back with a Hyosung GV650 review. David is a middle-aged father of four who rides motorcycles to maintain his sanity and escape a household of constant chaos. David has twenty-five years of experience modifying and restoring imported British and German sports cars, and he has one very supportive partner who understands his need to run wild on motorcycles.

My disappointment in not being able to afford the 2011 Honda Fury in burnt orange metallic was palpable, and, Hyosung’s GV650 only redeeming features were the sub $4,500.00 asking price and orange accent stripe along it’s fenders and atop the gas tank. Also, it was modified on the dealer’s floor- in an effort to make it more sexy, and, more sell-able to a walk in customer. So, AIS removed, along with the offending carbon canister, and, short chrome twin turn outs, along with a matching performance kit to raise the stakes – I really didn’t understand what I was buying from 700 miles away.

But, over 1 year and 10,000 miles later, I feel that I can discuss the relative merits of this virtual unknown in the motorcycle world. A cruiser by any sense of the definition: V-Twin motor, upright seating with forward controls, low seat height (27″) with handlebars that reach back to the rider, belt driven and with a wide 180 section rear tire and tube frame. The Hyosung GV650 evokes the look of H-D’s praised and hated V-Rod – a definite flashpoint for controversy amongst the hard core, and, casual motorcycle riders alike. They also make a 250cc cruiser, but the two look nothing alike.

The stock bike, on first inspection, is either loved or hated – few are on the fence regarding the style of this motorcycle. Thankfully, pictures can capture the essence, but, it does have spatial balance all around – so, it’s not offending, unless you don’t like the futuristic look altogether – it’s definitely not your father’s metric cruiser! If the look grabs you, go ahead – sit on it, it is comfortable for almost all sizes, as long as you adjust the pegs forward or back- depending on size. With a long, wide seat, there are multiple positions available, allowing for plenty of movement on those long, superslab runs.

But, looks aside, this isn’t your average V-Twin cruiser, by any stretch of the imagination. At under 500 Lbs, it weighs over 100 Lbs less than most of the bikes that it competes with. Also, with 72 HP and 47 Ft./Lbs of torque and an 11,500 redline, it specs out closer to a sportsbike than a low slung cruiser. Most cruisers run out of grunt at 5,000 RPM, while this bike is just getting into its power band. Exciting, fun, flickable, grippy and canyon carver are generally not terms used in cruiser reviews, so, this motorcycle breaks the mold in too many ways to list.

Lots of motorcyclists want the safety of a traditional cruiser, strong low end power, good straight line stability, comfortable ergos and the ability to convert it into a weekend get away bike, with: windshield, saddlebags, sissy bar, etc. Interestingly enough, it can be done to the GV650 – I did it myself, using factory matched gear – but, it’s inherently light weight can be distressing when the wind blows. Also, the ‘non traditional’ look of the bike gets destroyed by these added pieces/parts. Finally, a lack of quick release hardware makes the look more permanent.

Since the GV650 brings a curiously different approach to the cruiser dynamic, you would think that it would generate buzz in a class that hasn’t really changed in 40 years. But, Hyosung, a South Korean (not North Korean) manufacturer for over 35 years, has never invested money to become more recognized in the motorcycle industry. The GV650, also known as the Hyosung Aquila, has remained below the radar screen since it’s release in 2006. The relative unknown motorcycle can be had for a bargain. Since the motor is a collaborative effort between Suzuki and Hyosung from the late ’70’s, it’s a very robust, long lasting engine. However, Hyosung didn’t really believe in quality, so, lots of these motorcycles had problems, with charging issues being the primary problem. Also, early models had soft triple tree bolts and leaky fuel tanks which were addressed by manufacturer recall. However, many of these GV650’s languish, unridden by owners with dead batteries, bad stators and/or non functional rectifier/regulators. Also, some of the bolts get surface rust, far more than other bikes. This creates a great opportunity for a low purchase price, and, once sorted, they are very reliable, long lasting motorcyles that provide an exciting, dynamic ride.

Essentially unchanged from it’s introduction in 2006, the only real change affecting these bikes is fuel injection, which was introduced in 2010, and, changed in 2012, along with its name – now known as the Aquila Pro. The original dual Mikuni carbs are very functional, can be adjusted to reflect changes in intake and exhaust, and, there are performance kits available to address them. So, although cold starts require a little finesse, overall, they work well. They are not a reason to hold out for fuel injection, and, the carburetors adjustability to reflect intake and exhaust changes, actually making them a good value, and, potentially at a lower price- the value is increased.

Also, there are forums – (Check out Alternative Cruiser Discussions – Editor) where mechanically inclined owners hang out, helping owners fix existing issues with these different, metric cruisers. Replacement parts are available from a variety of sources, although, occasional delays do exist while waiting for shipping from S. Korea. Also, there is a wide selection of upgrades available- both from the factory, and, the aftermarket. For those less mechanically inclined, a dealer nearby may become a consideration for a potential buyer, but, any shop that works on metric bikes can fix any issue as well. 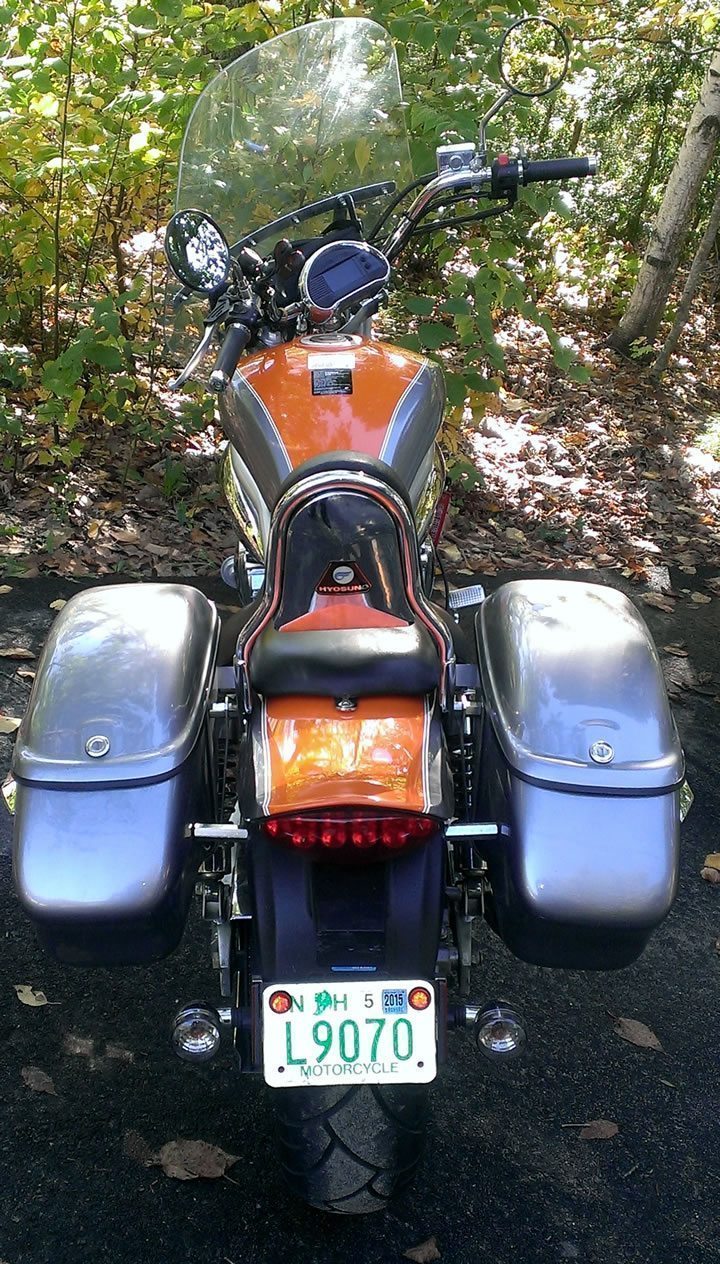 Personal experience reflects the value, with over 10,000 miles logged since brand new, with only a bad RR delivered from the factory needing replacement when new. A little surface rust on some bolts is annoying, offset by the great ride, and, wonderful reliability. Almost vibration free throughout the rev range, rear tire breaking torque- it too can be ridden like a grunty, low revver- due to its low weight. But, allow the engine to sing into it’s broad rev range, and, suddenly, the GV650’s flexibility becomes more apparent. Begging for more revs, it will use all of it’s braking capacity, which includes dual rotors up front – unusual for a cruiser in the middleweight class.

For the new, or, rider ready to transition away from their first bike, this is an excellent ‘in-between’ motorcycle, due to it’s light weight. However, at low speeds, and, being walked around in parking lots, it is heavier, and, therefore requires extra focus. I have noticed that at very slow speeds, I need to saw the wheel a bit to maintain stability – not very cruiser cool, and, I’m a little embarrased to admit it. However, it may be just be my lack of low speed skills, so, I do recommend this as an excellent transition bike for the newer rider.

Highs:
* Adjustable cruiser ergos with sportsbike performance.
* Unusual looks, light weight and big power.
* A conversation piece, regardless of where you are.

Lows:
* Charging issues.
* Surface rust
* Everyone wants to know what it is. 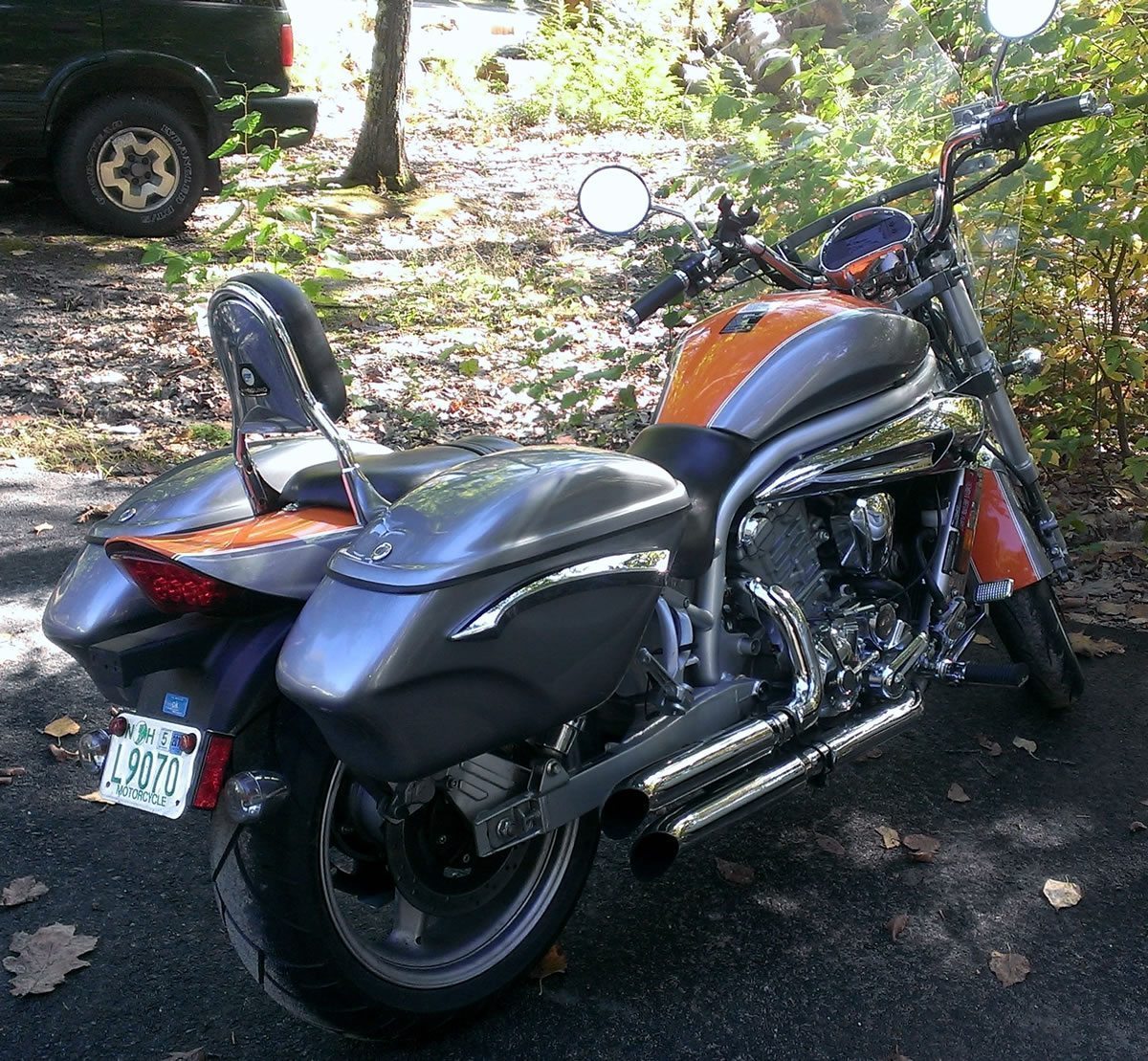 An unusual looking and surprisingly nimble bike, with high power, low weight and adjustable ergos for long ride comfort. Inexpensive new or used, many examples are available for $3,000 (used) – $5,000 (new), with low or no miles, and, a 2 year factory warranty available for “New, Old Stock” from an authorized dealer. This bike breaks all of the rules for the cruiser class from its high revving HP, class busting light weight, ability to lean into a turn, and, it’s comfort for the long haul. It’s low purchase price, and, cost of ownership is a refreshing surprise for those looking for value in a crowded, me too marketplace.

So, a GV650 is not for everyone, but, I can only share the observations of other bikers that I have ridden with. Impressed with the sound, and, the power of this bike, they are always surprised to learn that it’s “only a 650cc”. With 20 extra HP, and, comparable torque to weight ratios, this motorcycle exceeds the norms by a large margin. Also, once sorted, reliability is a bonus not expected, creating a unexpected value proposition. Having fallen in love with other, more traditional looking cruisers, I’m unable, or, unwilling, to let go of the class leading dynamics of this unique motorcycle. It grows on you, surprising you with its good manners, great ride, dependable power and comfortable seat. What’s not to love?

You ride a motorcycle too, so send us in a review of your bike and we’ll send you a few bucks if we run it on the site!
Contact us to find out more.
Cruisers Hyosung 2014-10-19
David Gulliver

David is a middle-aged father of four who rides motorcycles to maintain his sanity and escape a household of constant chaos. David has twenty-five years of experience modifying and restoring imported British and German sports cars, and he has one very supportive partner who understands his need to run wild on motorcycles.