Posted by: YouMotorcycle in Your Best Motorcycle Story October 1, 2012 4 Comments When Germans think of America, they imagine leather skinned, bandana wearing loners, six-shooters on their belts, pulling their 1958 Harley Panhead off an endless desert highway, stopping at a run-down gas station to escape the merciless sun for a shot of whiskey and a flirt with the tough, tobacco-chewing yet amazingly pretty cowgirl that runs her grandfather’s ranch a few miles up the highway …

Whether any of these cliches have even the slightest root in reality doesn’t matter when you look at the large number of American and German tourists visiting each others’ countries every year in search for what they believe is the German / American way of life.

Case in point: The Triumph man (American, born and raised) and I took a plane to Germany this summer to steal my sister’s and her husband’s motorcycles and set off on a journey through the mountains and valleys of the Alps – and you better believe we got to check some of the above-mentioned cliches off our lists! ;)

Another case in point is German Harley-enthusiast Walter vom Bauer. He’s not just chasing the Easy Rider dream for himself, he makes his living offering fellow German bikers a true American road adventure.

Walter fell in love with the United States in 1986 while living and working in San Francisco for a year. As a 16-year old, he had owned a small 50cc Zuendapp moped, but it wasn’t until he reached his forties that he decided to get a full-blown motorcycle license and become the proud owner of an American motorcycle – a Harley, of course. Just a couple of years later, in the late 1990’s, Walter finally combined his two passions – the US and motorcycles – and set off on a motorcycle journey through the American Southwest. Due to countless business trips to Phoenix, the trade representative for German-made windows had soon explored most of the Southwest on rented Harleys. To his German biker friends, Walter was living the ultimate Easy Rider dream – and in 2004, fourteen of them joined him on a two-week trip on the endless roads of the Southwest. The idea for DREAMROAD BIKETOURS was born! Since then, Walter has guided about 35 tours for several hundred German bikers (and the occasional Dutch – they’re our Canadians ;) ) dreaming of wide open roads which are hard to come by in the densely populated heart of Europe. Most of Dreamroad’s tours take about 2 weeks and cover predominantly the American West, but this year dreamers could also choose a Coast to Coast trip or a journey from Chicago to Los Angeles along historic Route 66 – a highway that’s legendary among German bikers although most of them are not aware that the 2,451 mile long highway underwent many realignments over its lifetime, and was officially decommissioned in 1985 after it was decided the route was no longer relevant. Oh well …

Walter has since retired from the window business and devotes his full entrepreneurial attention to Dreamroad Biketours. The bikes for these trips are provided by EagleRider, and most guests get to pick their dream Harley. Back home in Northern Germany, Walter and his partner/co-guide Meike are avid Harley riders as well. And they are by no means an exception to the rule: over half of the German bikers that go on tour with Dreamroad actually call a Harley their own – which makes sense, given that buying a Harley in Germany is widely seen as the attempt to buy a piece of the American way of life. According to the German Federal Highway Agency, almost 40% of all German motorcycle licenses are held by women, but only about 10% of all Dreamroaders are female. That may have something to do with the average age of Dreamroad bikers which ranges from 50 to 70 years … or with the fact that there was no main female character in Easy Rider. ;)

If you ever come across a dozen or so enthusiastic German Harley riders somewhere in the Arizona desert: give them a wave – because they are living the American dream, their American dream.

Speaking of waving – I don’t know anything about the history of this biker tradition but if I should venture a guess, I would say that it goes back to the Stone Age. Back then, I imagine, only heavily armed cavemen warriors rode motorcycles. When two biking cavemen met each other on the road, they showed each other their open palms to demonstrate that they weren’t hiding a hand axe. And that is how the biker salute was invented … (the more I think about this theory, the more it makes sense).

By the way, no country that has ever had the fortune of being honored with my motorcycling presence is home to more enthusiastically waving bikers than the good ol’ United States. Across six lanes and a 50ft median strip, at the apex of a tight turn, in the darkest of nights, or during torrential downpours, often with the left hand way up in the air, hog riders and crouch rocketeers alike greet with a child-like excitement that puts a smile on my face every time. American bikers make sure you feel their love – short of getting off their bikes to give you a hug. It’s heart-warming, smile-inducing, and very telling of the way Americans interact with each other as human beings.

And that might be an answer to the question why I picked the US over Northern Germany as the place I call home these days … it’s definitely not for the Harleys, I can tell you that much. :) 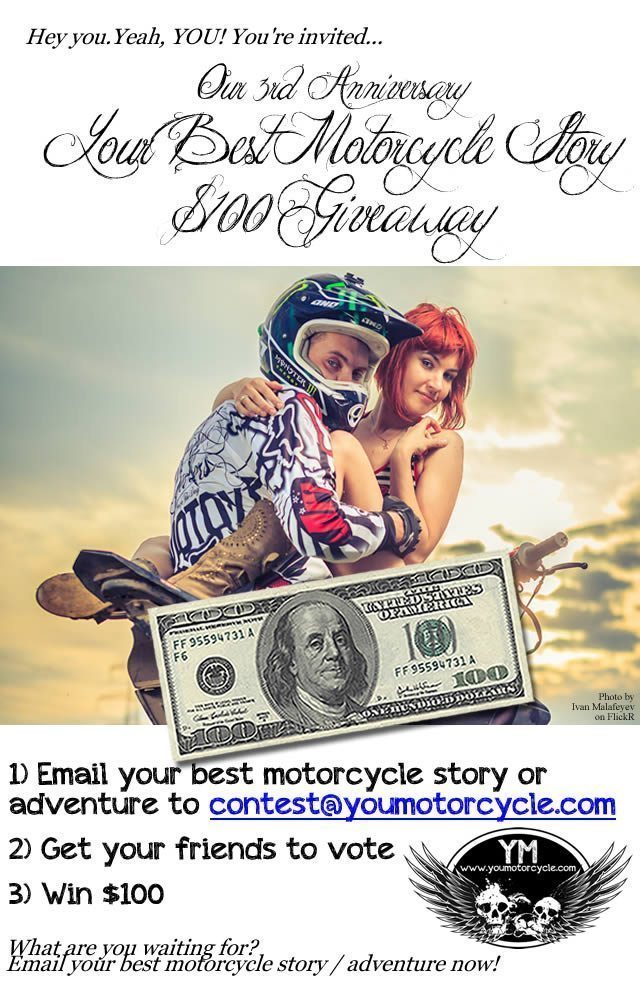 This post was submitted by Anna of Freeranging.net for the Your Best Motorcycle Story $100 Giveaway Contest. Read and vote for your favorite contest stories. Winner chosen by peer and editor rating!