We left the truck stop with a new destination in mind: Bruce Caves Conservation Area, in Wiarton, Ontario, via Harrison Park, in Owen Sound, Ontario.

“Outdoorsy! Adventurous! Dangerous!” our war-cry was thoroughly drenched in sarcasm. We weren’t exactly planning on toughing it out in the wilderness, more like setting up camp 10 feet from the road in a municipal park. I guess by urbanite City of Toronto standards that’s camping though, right?

We passed by all kinds of good clean hillbilly fun: And we were reminded that outside of the city, people take their trucks a little too seriously: 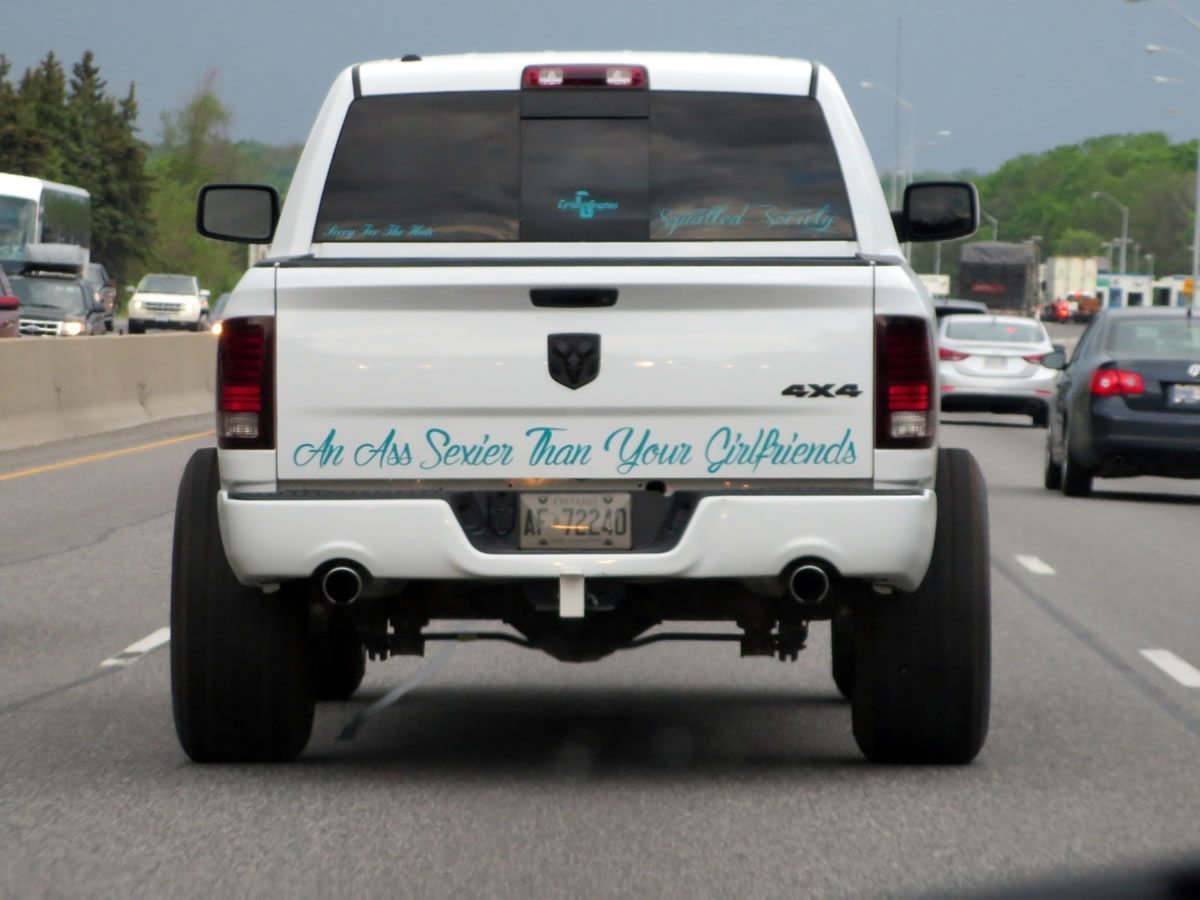 We found barns full of haystacks: 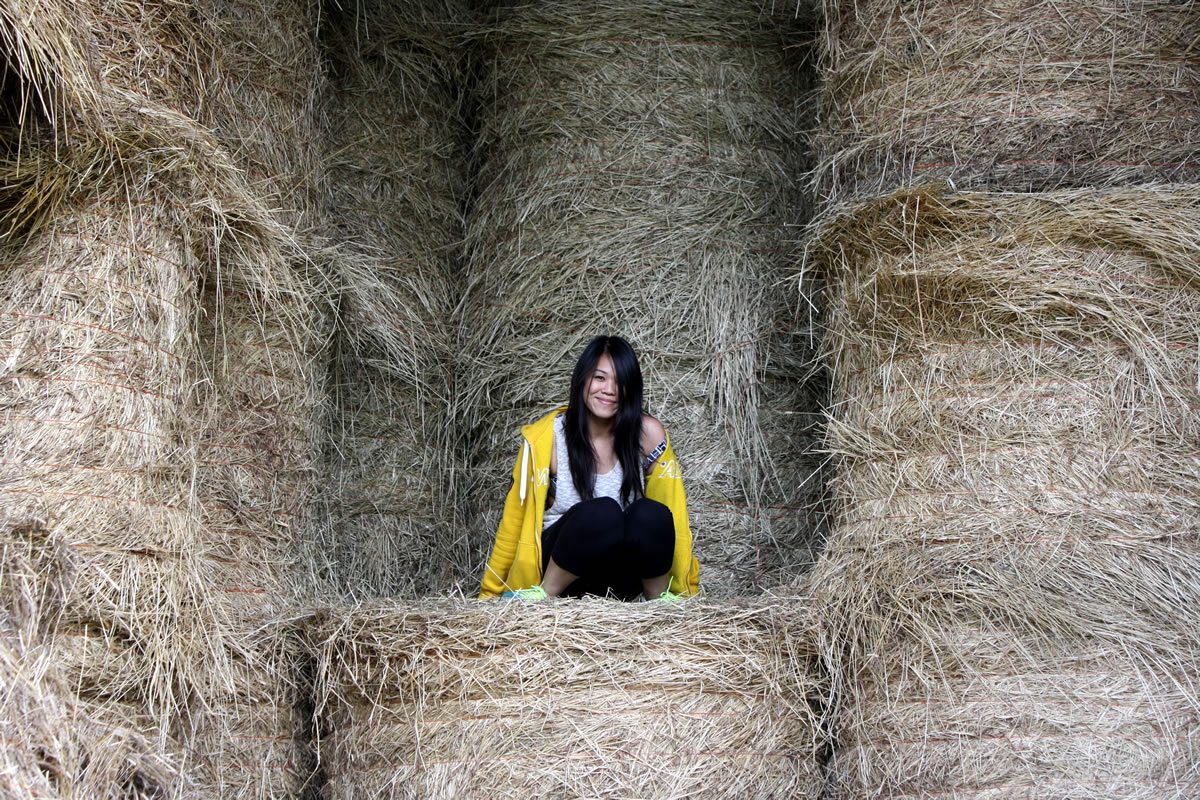 and even I decided to get my picture taken: By the time we were done trespassing on people’s farms (sorry), it was getting late. We arrived at Harrison Park in Owen Sound just after 9:00 PM. Whoever was in charge of the park had long-since left the park registration office empty. Even the park restaurant had closed for the night.

We did a drive through of the park and Coco made a friend who told us to, “Pick a spot, set up camp for tonight, be out of here before 7 AM when the staff gets in, and it’ll be fine.”

This seemed like credible advice. I do this thing where I trust people, and it gets me in trouble every time. More on that later.

We went to Shorty’s Bar and Grill in Owen Sound. Our waitress was gorgeous and told Coco she would be leaving work soon to go to another bar open later, just down the road. Coco had her own plans in mind and before we finish all of our wings we were back in the Jeep and I was taking directions to 8th Street. Destination: Smugglers – the only strip club in Owen Sound. Smugglers is on the second floor, accessible through a staircase that smells like urine. When we entered we were asked for ID before going to sit down. The stage was empty and remained empty for some time. It was awkward. There we were, in a strip club, probably the only joint still open in this town on a Tuesday night. We had climbed the urine staircase, gone back down to get Coco’s ID, and climbed back up once again, to sit there. We stared at an empty stage, hungry for something, hungry for anything to look at, really, as long as it wasn’t the road. And then, just when we thought it couldn’t get any more weird, the DJ started playing love songs by Taylor Swift and the like.

We made friends with one of the dancers, Vicky, from Montreal. She was fun, and gorgeous, and somehow bonded with Coco, who seems to make friends everywhere she goes. We exchanged life stories and currencies with Vicky before returning to the Jeep – a little giddy from the booze – and driving back through Owen Sound. Adieu, chérie!

I wish we could say we painted Owen Sound red that night, but we didn’t. Far from it. We found our way back to Harrison Park and picked a camping spot. We thought it would be an uneventful rest of the night, but of course we were wrong. Our corner of the park was dark, away from washrooms and overhead lights. It was just us and the stream. The only light came from Coco watching A Bronx Tale, learning about the door test:

Just as I began to fall asleep, out from the darkness two lights appear, and then two more.

I’m the type who worries about women getting home safely after dark. Having two police cruisers come and check out an illegal campsite in the dark in an empty park might have been overkill that night, but it might save a woman’s life on another night. While I can sometimes be critical of law enforcement, I’m giving Owen Sound PD a thumbs up.

The officer we were dealing with was fair, straightforward, non-accusatory, and non-hostile. Being a young male motorcyclist from Toronto, I was completely unprepared for this, as our cops, and OPP, are usually complete douchebags. After the Owen Sound PD officer did his due diligence, asked his questions, and made sure everyone was alright, he said we could stay until morning and left a few minutes thereafter. No threats, no warnings, no weapons, no tickets. Just a cop with a flash light making sure everything was alright.

When the two police cruisers finally drove away we laughed for a long time. Of all of the shenanigans that we get up to, it’s camping in a park that has two cruisers show up? Previous: Operation Beach Bums – The Ride That Wasn’t
Next: Behind the Scenes Look at Turning Humans Into Motorcycles