YouMotorcycle sits down for a second time with the motorcycle riding, custom bike designing, motorcycle shop owning, talented, beautiful, and now famous, Shasta Smith. That’s right, the pint-sized spitfire is back with fresh stories! It’s like getting caught up on an old friend’s exciting life. What’s not to love?

YouMotorcycle: You’ve been in front of the camera a lot since the last time we spoke. Tell us about that.

Shasta: I’ve spent half of 2014 filming “RED HOT DESIGN” which showcases a small portion of my big design life.  Cameras follow my clients, my designs and the building of my interior and exterior designs.   The cool part is you also get see my motorcycle designs in the background of my studio, including the one I ride in the show.  There are several video clips of the show on my website. 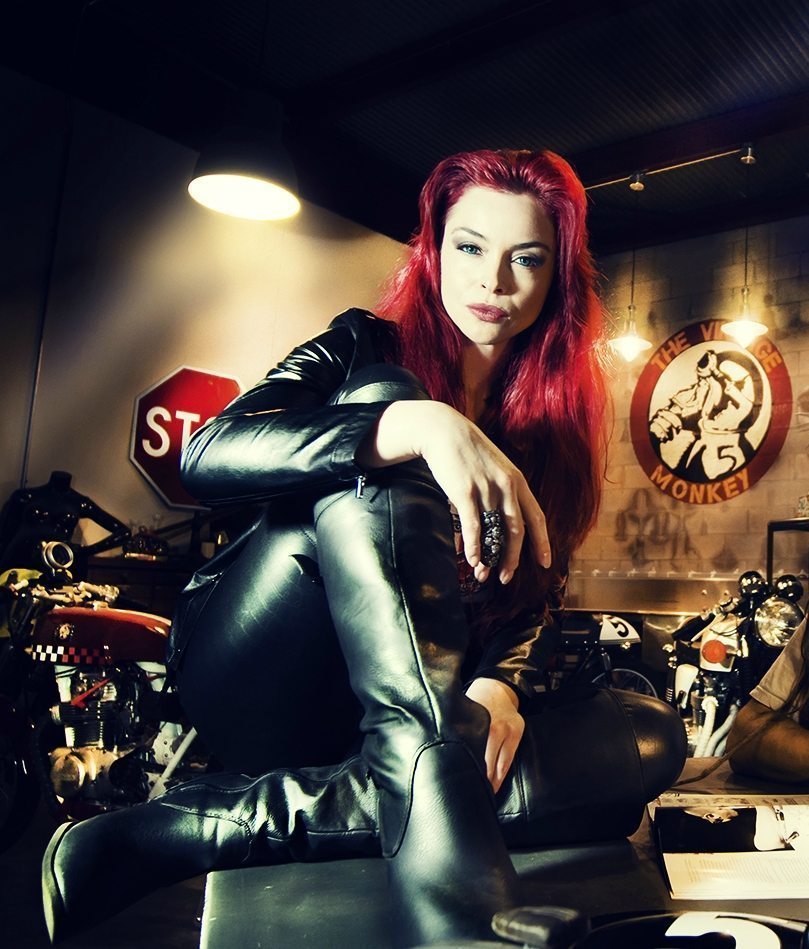 YouMotorcycle: Were you shy at first?

Shasta: Nope!  Its like a wild roller coaster ride.  I really don’t mind the cameras at all, in fact after  18 hour days you start to forget they are always in your face.

YouMotorcycle: How’s the kid reacting to mom being a star?

Shasta: My son is 16 years old and pretty funny.   He won’t watch me at all when I’m on TV.  However recently he told me that he was very proud of all my hard work…it melted my heart. YouMotorcycle: Was there ever a time when you had a camera in your face and really wished you didn’t?

Shasta: Of course!   Cameras are on 12 hours a day 7 days a week, and when the camera operators leave for the night, all the go-pros start running time laps while we work into the night.    Sometimes it’s a tough battle, you want to just walk away when you are so sleep deprived and have strict project deadlines.

YouMotorcycle: The whole TV series thing, is it something that you have experience to understand? How do you explain it to people who have never gone through it before?

Shasta: TV is a complicated beast, if you are not 100% passionate about what you do, it will fail.   You have to be prepared to handle the good, the bad and the ugly…with grace.  I am a co-creator of the show, and one of the executive producers so I get to be involved in a lot of “off camera” experiences also.    I come from a family of hard workers, but this has been one of the hardest projects I’ve ever been involved in.   There is very little sleep and very little time to spend with loved ones while filming. YouMotorcycle: Tell us about your fight, and eventual curb-stomping, of the big ‘C’.

Shasta: The exact same day I got the call that I was signed to a season of Red Hot Design, I also got a call from my doctor saying that I had cancer.   It was a big smile that was followed by a loud “@#$%^&”!!   Since then, I have finished filming the season, and two days after filming I went in for major surgery.   The good news is that I’m now in good health.  My number one goal was to get back to work and put all that bad news to rest.  Done! And Done!

YouMotorcycle: Last time we talked you said the three things that you couldn’t live without were teriyaki beef jerky, your kid, and tissues. Has that list changed at all?

Shasta: Nothing has changed.  I love my beef jerky, and my kid (notice I jokingly put my kid second) and I always have tissues by my side!

YouMotorcycle: Love it. Seriously though, tissues? What gives?

Shasta: I have the WORST allergies on earth. YouMotorcycle: Have you ever turned down a job for a client?

Shasta: Yes, in my 15 year design career I’ve only turned down two projects. YouMotorcycle: Last two questions. What was your first motorcycle build or the first time you really felt a connection getting hands on with a motorcycle?

Shasta: I’ve been riding since I was a teen, but I only started designing and building bikes about 7 years ago.   I was unable to ride due to a “non-motorcycle” injury, so I felt the only way I could be around bikes was to start designing modifications for restorations and the rest is history. YouMotorcycle: Of all of your motorcycle builds, which was your favorite and why?

“Pint size spit fire” – Love it. Do we smell a new t-shirt design brewing? On a personal note, it means a lot to me to have phenomenal women like Shasta on YouMotorcycle. These are the kinds of stories I show to people when they ask me what the site is all about. Shasta never ceases to impress. Rock on, girl, you’re the bomb! – Adrian

You need to see our original Q&A session from 2013, when we first featured Shasta Smith on YouMotorcycle as our Woman of the Month Winner. Check that out here. After that, be sure to visit The Vintage Monkey, Shasta’s site, NOW.

Welcome to the old site!