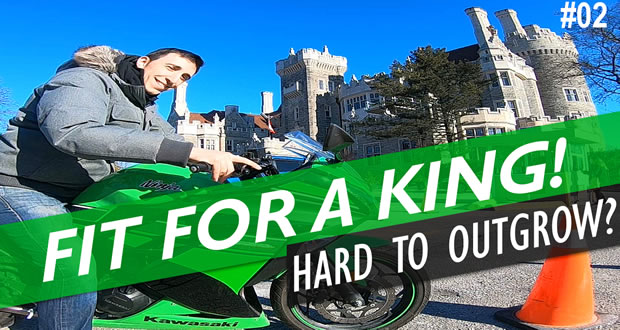 After a couple weeks ripping through the city on the baby-Ninja, it was time to share my review with you guys. As someone who’s put tens of thousands of miles on bikes 250cc and under, I could tell that Kawasaki had put extra punch and attention to detail in their Ninja 300 beginner motorcycle. The only question was, will riders outgrow it?

The bike we’re looking at is a 2013 model year Kawasaki Ninja 300. I originally bought it as it was a good deal, and thought either myself or my friend would ride it. I love my Harley-Davidson VRSC Night Rod, but at 607 lbs, it would be nice to have a lighter bike. The little Ninja had big shoes to fill, and it did well, especially in the city. For anyone who doesn’t already know this: It’s always better to ride a slow bike quickly than it is to ride a fast bike slowly.

But what about the difference in performance? At less than a quarter of the horsepower of my main bike, the Ninja 300 still managed to do well. It wasn’t the rocket ship class machine I was used to, but in the city and even the suburbs, the Ninja 300 will move well for any rider who knows how to keep her in her power band. The zero to 60 mph time is only about a second more than my V-Rod, and still under 5 seconds, meaning that the light weight of the Ninja goes a long way.

We had previously reviewed the Ninja back in 2013, but this was our first time motovlogging it. Check it out the video review below!

You can learn more about the bike, see full specs, including braking time and more, by reading our Kawasaki Ninja 300 review here:

Previous: Things to Consider Before a Motorcycle Road Trip
Next: The $1000 Ninja 650 Rebuild Series: Episode 2